Yesterday as well as being Summer solstice, was International Yoga Day. In celebration the marina brought in a yoga teacher for a Kundalini yoga session.

I’m now well into my yoga, even in this heat, but let’s just say it was an hour and a half of my life I will never get back.

It was not what we were expecting, having psyched ourselves up for, and looking forward to tree poses and warrior poses etc. This was all sitting down to work on our spine, and lots and lots of chanting, and my favourite, relaxation. Oh how I hate the relaxation. Still we did it and having gotten over the chronic feeling of back ache 15 minutes in, through having to sit with a very straight back whilst cross legged, and trying to look as if you’re participating in the chanting, it was done. In fairness my back did feel better, but I think I’ll stick to my warrior type yoga sessions which have a lot less relaxation and certainly no chanting.

We did have to give permission to have our photo taken, and many of you are aware I hate having my photo taken. Luckily I have been blocked out, but I was there, the red arrow marks me, behind my friend Karen, and one from the back, basically these are my ideal type of photo. 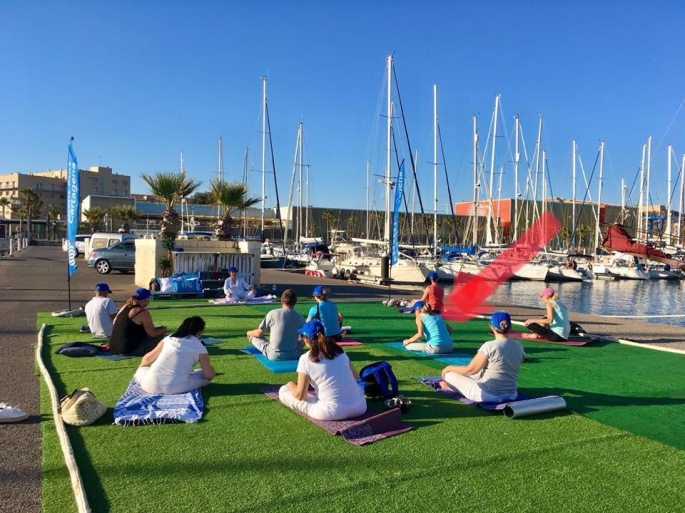 Also this week we had the barbecue on Sunday, which finished with a musical session, and singing and at 11.45 p.m. we were convinced to do some country type dancing thingy. It was hilarious and even Craig joined in, although he did seem to be indicating that he needed oxygen by the end. We left at about 12 but allegedly some were still going at 2 in the morning! This barbecue night we’re planning a games night, so what could possibly go wrong in a marina full of men who no longer have a day job in which to demonstrate their managerial skills!

Wednesday we ventured into town for tapas, thinking that there would be a great buzz given the fact spain had a World Cup match on. Clearly they had all stayed at home to watch, either that or they didn’t really care, in all honesty it was all a bit of damp squib, as far atmosphere was concerned. But you can’t beat a good tapas.

Today for lunch we’ve been to a menu del dia in Mazarron with our friends Val and Cliff. 4 courses, and a jug of Sangria for 20 euros per couple, not bad. And the food was delicious.

Tonight, well we’re back on with the darts, and given that none of us have played for about three weeks, let’s just say it will be interesting. 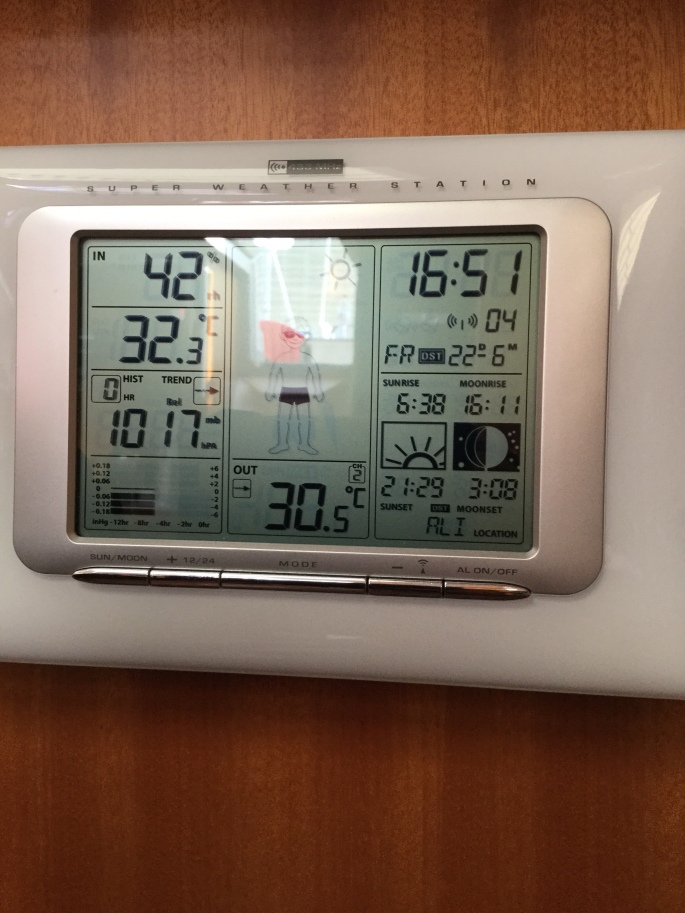 Yes Meteo max is once again down to his budgie smugglers, and those are the temperatures in the shade. I knew we should have bought a boat with air conditioning!

Have a great weekend x

One thought on “Kundalini yoga”