This is the imaginatively named ‘Sailing Yacht A’ and it’s currently berthed at the marina next door.

It is the world most expensive sailing yacht and cost a mere £360 million. Yes, £360 million! Presumably the owner just got bored with his £240 million boat, also with an imaginative name of ‘Motor Yacht A’!

Owned by a Russian billionaire it is 468 feet long, and boasts masts 300 feet tall, which is higher than Big Ben. The main mast in the middle even has its own little room inside it.

In my opinion, it just goes to show that no amount of money can buy good looks, because boy is it ugly – but each to their own I suppose. I certainly wouldn’t say no to the money, but the boat forget it, I mean it must be a nightmare to park! 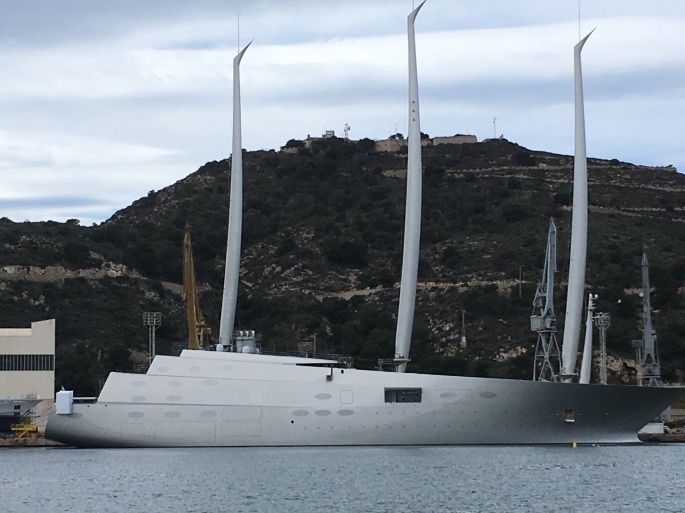 No doubt one advantage though is they have not noticed at all that the winds have been gusting over the last few days, and I don’t suppose for one minute that they have been experiencing the same ‘being in a floating washing machine on a spin cycle’ that the rest of us have.

No, I know it’s no Beast from the east, or it’s little sister, but for those of you now familiar with windy.com there’s a whole lot of red coming in the next week, and remember red is bad, very, very bad. Off now to find the sea sickness tablets, just to make sure they are at hand!