So I thought I’d take this opportunity to fill in the gaps, what have we done all week outside of the things I have already told you about.

Granted I still wake up in the morning not quite knowing where I am, many mornings because of the temperature at night or coolness in the mornings before the sun breaks through I still think I’m in the caravan at Woolverstone, then all of a sudden I remember I’m on a boat.

I am managing to meet my goal of doing one constructive thing a day, albeit they will seem like mundane tasks to you, but believe you me ironing on a boat is a chore, although Skipper is more than happy to be dressed in clothes that have not even had a hint of an iron, I on the other hand will not be seen with him when he looks like a tramp!

So this week I had the task of turning a normal square duvet into a triangular one – 3 hours measuring, cutting and with the sewing machine going at a snails pace, still it’s done. I’m not sure it’ll win any design awards but it’ll do the job.

Wednesday was tapas night and about 20+ of us traipsed through town to a small tapas bar. All very sociable, however a Spanish menu did make life difficult. Personally I preferred the tapas bar we went to in Barcelona where it was all made up and you picked what you wanted. At least that way you could tell if the tapas was going to include the dreaded anchovy or not!

I have been working hard on Duolingo, well at least for a couple of hours. It would seem I am now 6% fluent in Spanish, so I just need to find a zoo and a clothes shop to go to and it’ll seem like I’m a local. I’ve also read 3 books this week, and done loads of my tapestry cushion. I know it’s ridiculous that you class reading a book as doing something constructive – but it beats sitting on your iPad all day playing Candy Crush!

I have worried about Craig sitting getting fed up, but he says he’s happy just sitting and relaxing. He knows the jobs that need to be done so I’ve decided that for the benefit of marital peace and harmony I’ll just leave him to it and let him do things when he’s ready. I shouldn’t beat him up just because I have this unending need to remain in the Completer box.

On Saturday we made our weekly trek to Carrefour, and I am now proud to say we are proper long term cruisers, not because we’ve been on the boat for more than 5 minutes but because we now have fold up bikes. They are, it seems, the most important piece of equipment a boat needs! Ray next door tells me we should cycle 2 miles a day, I tell him it’ll be a great achievement if I manage to get out of the marina, although it has to be said the city does have a fairly good cycle path around it. And probably the most important thing is the bike has a bell, the thing is will I be able to remove my vicelike grip from the handlebars to ring the bell! That will require me to think about something other than just trying to stay upright.

In Carrefour Craig treated himself to a bottle of Spanish brandy at a whole 10 euros, because we didn’t find the back up to the previously drunk Cognac, maybe because that too had been previously drunk! Anyway, this is a random fact and shopping item to throw into the conversation but it is important, be patient.

Sunday was clean the boat day, I did the inside, Craig the out and once the chores were done we got our bits ready for the barbeque. Homemade coleslaw and potato salad, two of our weekly staples that previously we just grabbed off the shelf from Tesco. It seems coleslaw is not a Spanish thing, and potato salad, well yes if you’re happy to have it laced with garlic.

Anyway, the barbeque this week was fantastic, and a good 4-5 hours well spent. 60 people turned up and I have found a new friend. When we were chatting and she tells me she likes structure to her week, and does a budget spreadsheet once/twice a month I knew she was a kindred spirit. And I knew the friendship stars were aligned when I found out she is also on an Elan, the same type of boat as us. The age gap between her and her partner is roughly the same as Craig and I and the ages are the same. So a match made in heaven.

Now one thing I am still stumped by, is a guy brought along his drone, I’d never seen one before but during he barbeque he set it off to video the proceedings. Now what I don’t understand is how he the ‘lost’ it and had to go around the marina looking for it. How can you lose something that you are in control of, needless to say none of the chaps on our table could come up with a plausible reason. Whether it was found or not I don’t know, but if not, well it was an expensive loss.

There’s a very interesting mix of people here, I think we are still the shortest term, long term cruisers, but the wealth of knowledge that is here is quite astounding, and the thing is everyone wants to share their experiences. Not to be boastful about what they’ve done, but to try and help you learn from their mistakes. I haven’t met one ‘up their own bum’ person yet, and Craig was delighted when he found out that the guy had he just been chatting to was the author of the book he had read only last week. He’s now on his second book but unfortunately I think he does it the modern way and types it himself, and is not the salty old sea dog I’m looking for.

By about 8 (the barbeque starts at 5), those with musical instruments were encouraged to go and get them so a singalong could take place. So now we have a keyboard, yes a Roland keyboard on a stand, a ukulele, bongos!, a guitar and tambourine. I know it’s all a bit ging gang gooly round the camp fire, but it was fun. 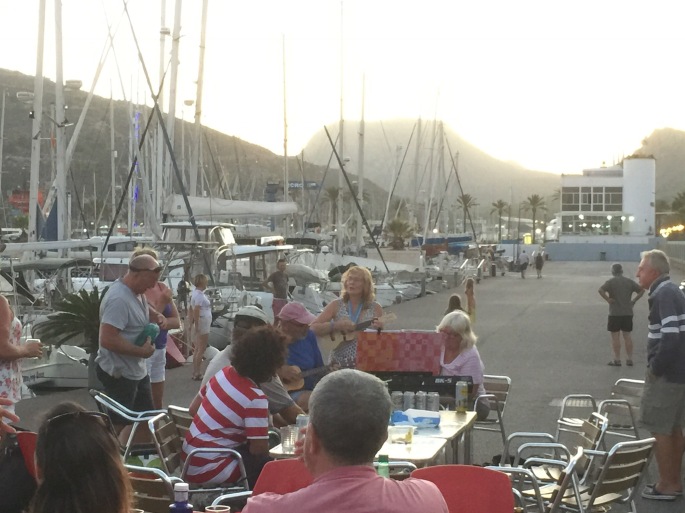 Craig by this point had walked back to the boat to get the brandy for him and Ray. Now in fairness he had opened the brandy on Saturday night just to check it was alright, but we’re talking a full bottle with one measure missing. With the benefit of hindsight I should have taken a before and after. That is to say by the time I came back from my chat with my new friend the bottle is empty bar one small measure in the bottom. Yes skipper and Ray have polished off the lot in one sitting! I always thought brandy was one of those drinks that you had in the cupboard for ages, having the occasional snifter after a nice meal. No it seems not.

So Mondays task is make mosquito nets for the rear berths, ooh it’s a glamorous life this one at sea!